The Flinders Project hosts a highly prospective copper-gold target portfolio, in the same structural setting as the giant Olympic Dam (10 billion tonnes @ 0.82% Cu, 0.31g/t Au and 260ppm U3O8) and Carrapateena (760Mt @ 0.8% Cu and 0.3g/t Au and 143ppm U3O8) deposits. The project contains significant outcropping, high grade Cu-Au surface mineralisation in iron rich breccias, which was the focus of historical mining in the 1800’s. Flinders Project is located 80km from Carrapateena and 150km from Olympic Dam, with power and rail on the lease.

Various artisanal and small-scale copper mining operations occurred within the Warrakimbo Ranges where high-grade copper mineralisation was first noted in the late 1800’s and continued intermittently for 130 years.

Historical exploration failed to recognise the potential connectivity between the outcropping mineralisation in the region and the IOCG affinity of the geochemistry and mineral assemblage. Only 1 shallow hole has been sunk into Main Lode which intersected mineralised breccia at depth however was never assayed nor followed up. Two shallow holes drilled into the Jenkins North magnetic anomaly intersected hematite and magnetite altered volcanic breccia resembling the Woolshed breccia which hosts high-grade copper and gold at surface. Geophysical modelling indicates the historical drilling fell short of reaching the magnetic source which extends to over a kilometre depth from 4 meters, as a pipe-like feature.

At Woolshed/Metabase, a rich copper geochemical anomaly has been defined for over 3km’s along the Mt Stephen Thrust (MST) and is associated with a prominent magnetic high and gravity anomaly. A gravity body is  modelled to extend from near-surface to a depth of 700m, which has low level copper in soil anomalism and adjoins the magnetic body and zone of high-copper anomalism immediately to the east, as shown in Figure 3. Thirty RC holes for approximately 4,000m has been planned consisting of 6 drill fences covering 2,000m along strike and 500m across strike over the Woolshed target.

Jenkins North (Figure 4) and Jenkins South (Figure 5) are characterised by large coincident and semi-coincident gravity and magnetic anomalies which have overlying copper-rich hematite and magnetite breccias in outcrop. Only 2 shallow holes have been drilled historically at Jenkins north, which failed to intersect the magnetic target, however intersected hematite-altered volcanic brecccias which resemble those which host high-grade copper and gold mineralisation along strike south at Woolshed.

Copper and hematite hosted in hydrothermal iron breccias were mined historically at Main Lode from surface down to roughly 30m below surface. A gravity completed by Taruga over the Main Lode historical workings defined a weak gravity anomaly coincident with the area of mining, along with a significant gravity anomaly down-dip from the workings as shown in section in Figure 6. This indicates the potential for the mineralised breccias to blow-out down-dip into a larger mineralised zone.

Grab samples from mining spoils at Main Lode reported exceptionally high copper grades of up to 52% Cu and 14g/t Ag. All indications are that Main Lode has the potential to develop into a significant mineralised system down-dip at depth.

A continuous copper in soil anomaly supported by the geophysics has been defined over more than 10km along the Mt Stephen Thrust from Woolshed/Metabase in the north and the Mt Stephen Prospect in the south. It is highly likely that areas of increased anomalism are associated with cross-cutting structures with increased hydrothermal fluid flow. A new exposure, the Saddle Prospect (Saddle), was identified over an area of 650m x 30m along the MST and a further 700m along an adjoining splay structure for a combined strike length of >1,300m as shown in Figure 7. Highly significant results of 27.1% Cu and 9.2g/t Ag (WK0602) and 6.3% Cu and 3.8g/t Ag (WK0599) were reported from the northern portion of Saddle and 5.8% Cu (WK0619) and 3.1% Cu (WK0606) were reported from the southern splay structure.

The Mt Stephen Prospect lies within the crush zone at the flexure of the MST and has a strong, coincident magnetic and gravity anomaly with soil support at surface as shown in Figures 7 and 8. The entire structure  is anomalous in copper over 3.5km up to the outcropping, mineralised breccia and sandstone/siltstones identified along the MST (Saddle Prospect). The coincident magnetics, gravity and associated geochemical anomalies makes the Mt Stephen Prospect a prime target for future exploration.

Spoils from a single shaft at Rambla showed good copper mineralisation hosted within sediments with little iron association, which is typical of Zambian style sedimentary hosted mineralisation. Rambla mineralisation is associated with a low order copper in soil anomaly shown in Figure 3 which extends over 1.5km in a north-east direction. Rambla lies to the west of the MST and supports a different style of mineralisation at Flinders which will be drill tested. 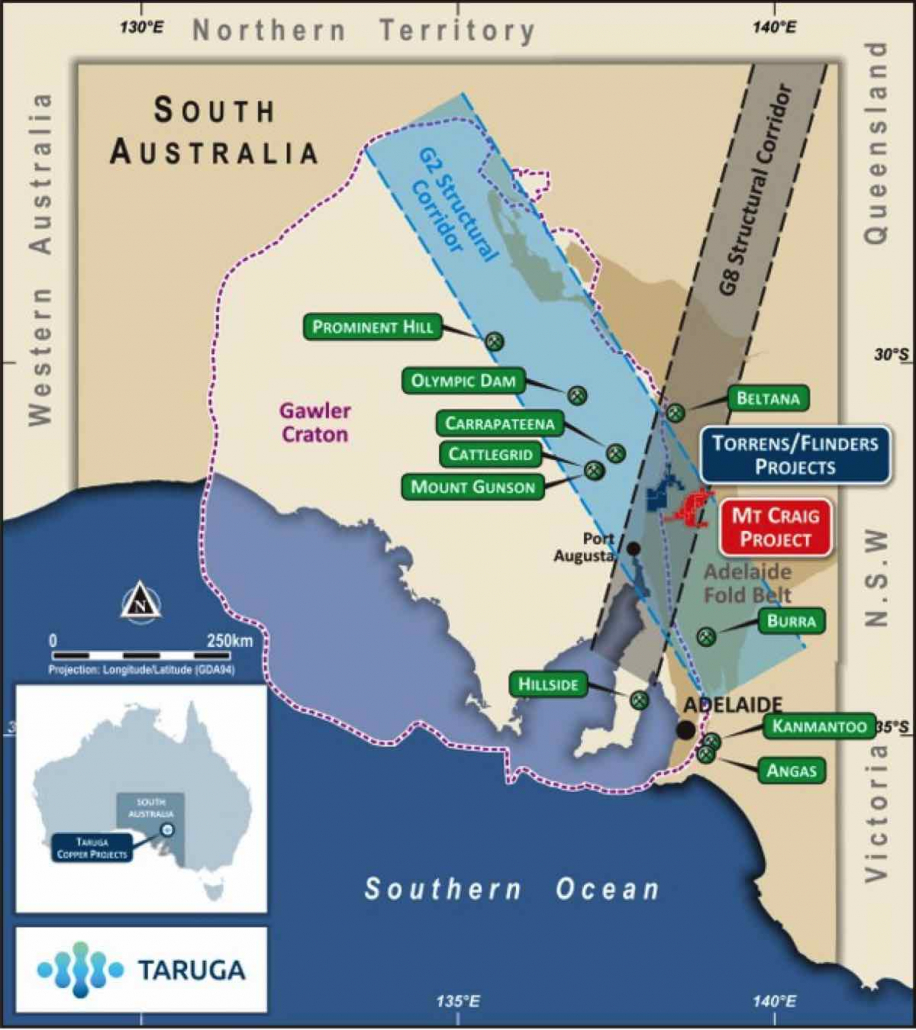 Figure 1: Regional Map showing the project locations within the Adelaide Geosyncline and G2 Structural Corridor within the Gawler Craton and Significant Mines/Deposits Nearby 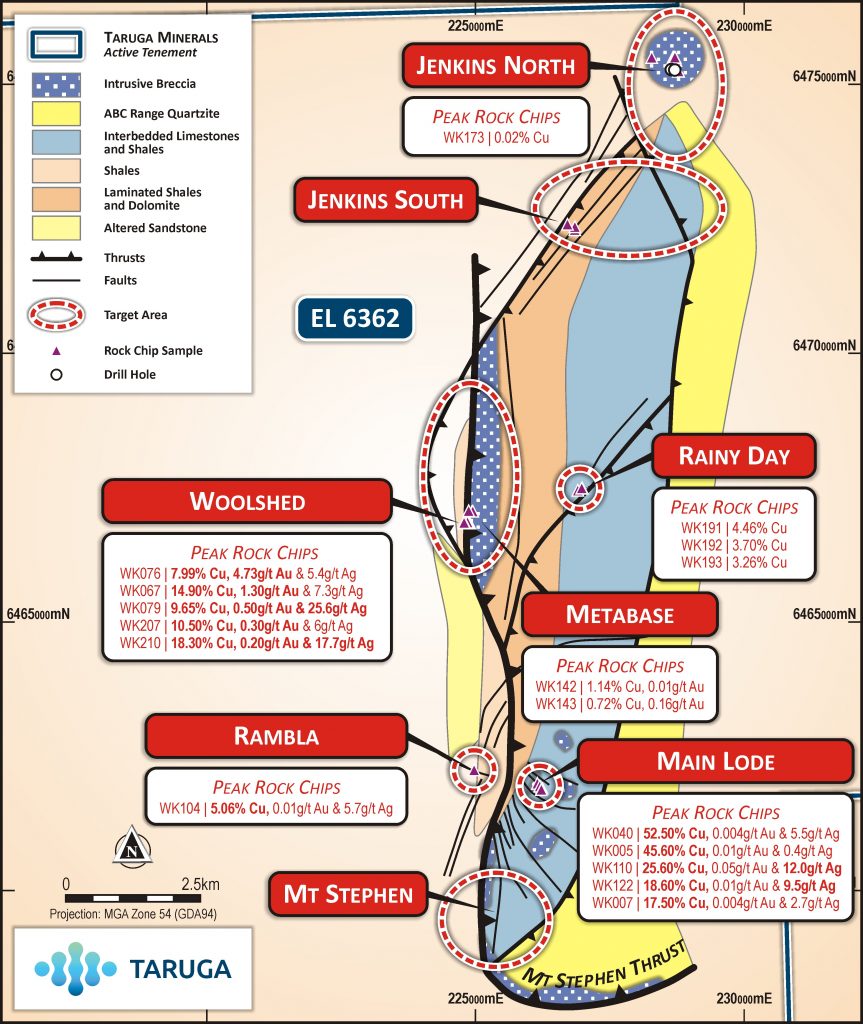 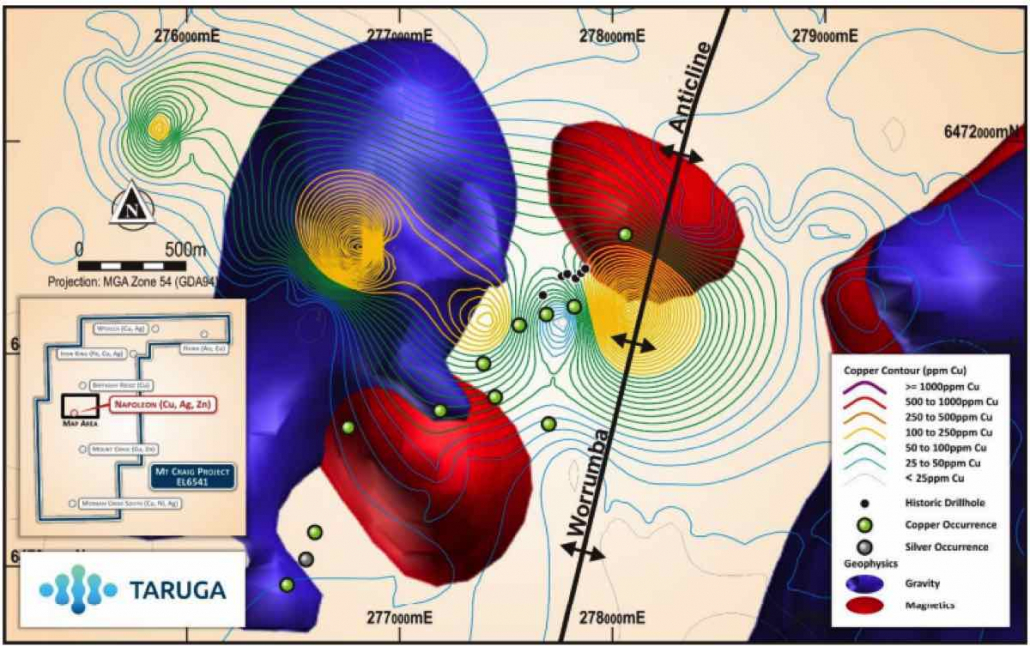 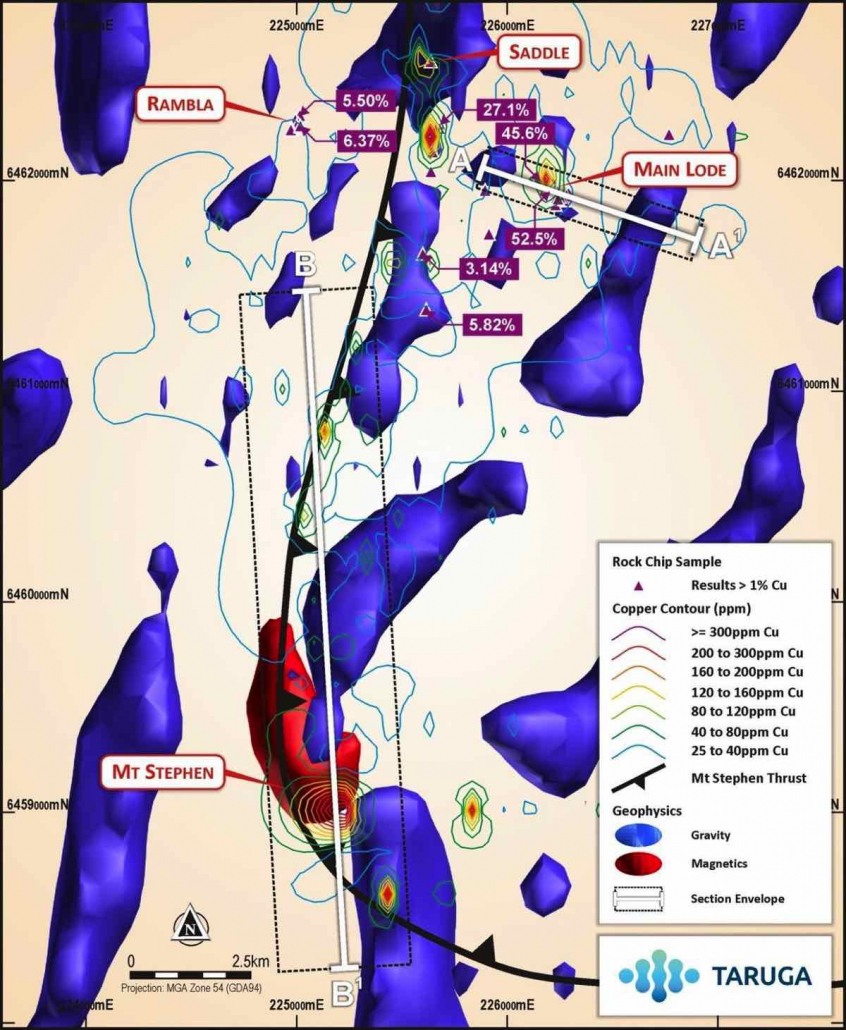 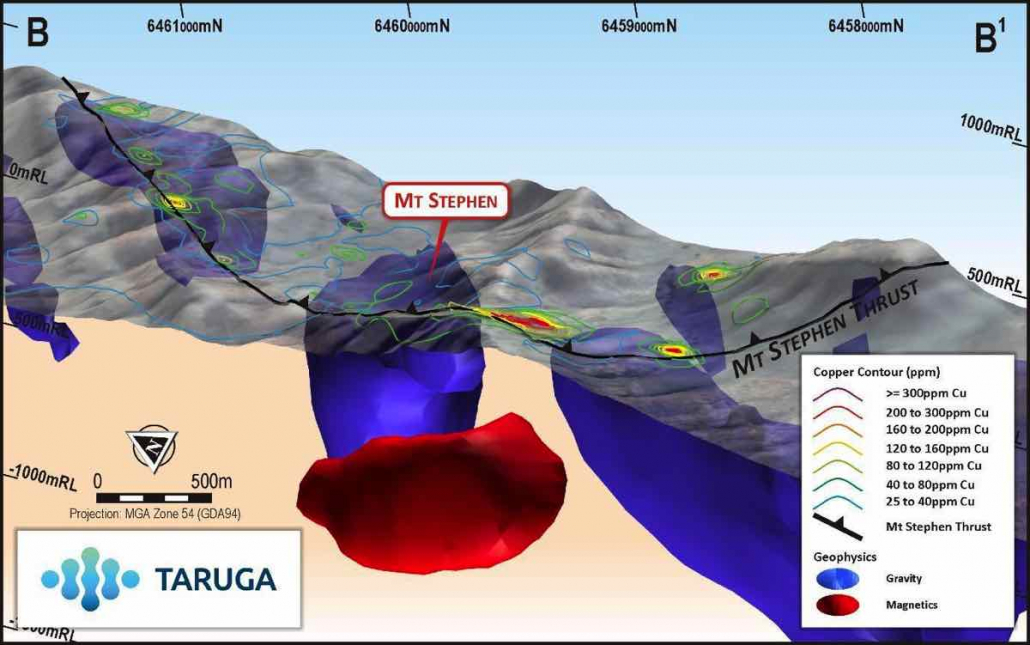 Figure 8: An Oblique Section Across the Mt Stephen Prospect showing Copper in Soil Contours, the MST and the Coincident Gravity and Magnetic Anomalies.