The project is located approximately 300km south of Perth in the southwest region of Western Australia.  The region is emerging as a base metal exploration zone through the recognition of a similar geological setting to the recent Julimar Ni-Cu-PGE discovery made by Chalice Mining Limited.

The tenements are applications that are being progressed to grant through the development of an Environmental Management plan, with initial meetings completed with the WA Department of Environment.  The field reconnaissance visit focused on tenement E70/5029 and noted that access to, and within, the tenement is excellent and that reconnaissance and follow-up exploration can be undertaken utilizing existing tracks and access with little or no impact on the environment.

Field reconnaissance completed within E70/5029 revealed limited outcropping geology with the majority of the tenement masked by lateritic weathered residual and transported material and areas of transported alluvium and scree.  The tenement includes areas covered by vegetation, however also includes cleared farmland, state forest and plantation forest with an extensive network of tracks, fence lines and pipelines allowing access for exploration.

Hand-held XRF analysis was used on traverses across the identified magnetic high unit and returned anomalous levels of nickel and copper, however, the unit is completely masked by lateritic material.  It is expected that auger geochemical sampling on existing tracks will provide a reliable first pass test of the area.

In the southern portion of the tenement, the transported cover was reduced and a small amount of subcropping geology was located.  Hand-held XRF analysis again confirmed anomalous copper (up to 136ppm Cu) and nickel (up to 116ppm Ni) that requires follow-up exploration.  These anomalous zones are located on the southern margin of the interpreted gravity anomaly and may represent extensions of the “Odin Base Metal” targets identified on the Chalice Mining/Venture Minerals JV tenements located immediately to the west.

The field reconnaissance also reviewed the regional geology and confirmed the presence of ultramafic units that have the potential to host base metal mineralisation.  These units are interpreted to extend into the Taruga tenements and represent priority exploration targets.

The next stage for the Manjimup Project is to complete the Environment Management plan and progress the grant of the tenements, with E70/5029 being the priority tenement.  Following grant, a programme of surface geochemistry and detailed geological mapping will be undertaken to identify and define targets for detailed exploration. Follow-up geophysical programs including ground-based EM program will also be evaluated. 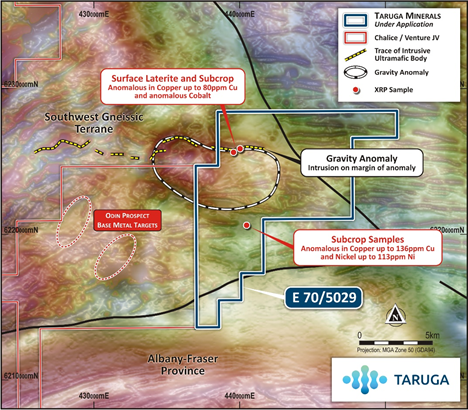